Disruptive Innovation – ‘’Many have misunderstood the concept’’

“Disruptive” and “innovation” – the two terms are often mentioned in the same breath, but they are also misunderstood and misused. Harvard professor Clayton Christensen is considered the inventor of the Theory of Disruptive Innovation. He is astonished that his theory is applied to all sorts of things. Neither Uber, nor Tesla or Airbnb count among the disruptive innovators.

According to Christensen, many have not understood the concept properly. It would be good if there were more disruptive innovations, because that is the only innovation that really brings growth. According to Christensen, disruption describes a process in which a small business often challenges a successful established business with few resources.

Existing successful companies often focus on improving their products and services for their key customers while neglecting other customer segments. This is where the disruptive companies start. They often offer simpler products at a lower price. Because the established companies are primarily concerned with improving profitability in the lucrative segments, they do not observe this at all. The disruptive companies are becoming increasingly successful, evolving and delivering what the majority of customers want. They gradually accept the new offers and that is when disruption happens.

“When opening up new markets, disruptors create a market that did not exist before. They simply find a way to turn non-consumers into consumers.”

But there are also disruptive companies that create completely new markets that have never existed before. Example computer. At first, the central computers were so expensive that they were almost unaffordable even for research institutions. Then the PC came along, the laptop followed, and a completely new market was created. The next step was the smartphone.

The disruptive companies Uber and Airbnb are often mentioned in this context. However, according to Christensen, these are not showcase examples. Uber has changed the way taxis work. The company has no cars and no drivers and therefore no fixed costs. Just as Airbnb has no hotels and no staff. Your business model is to use the available resources differently. But this is not a disruptive innovation, but a preserving or incremental one.

“Uber and Airbnb’s business model is not disruptive, but incremental innovation.”

According to Christensen, all three types of innovation are important and there must be a balance. But one problem is that efficiency innovation brings the greatest return. This is hard on businesses. Because they cannot grow with it. Entrepreneurship is therefore a backup plan for companies because they cannot renew themselves internally. Entrepreneurship means trial and error. Incremental innovations are also important to keep the market running. But by definition they do not create growth.

For Christensen, even Tesla is not among the disruptive companies. He thinks that if an electric car costs $100,000, that is luxury and not disruption. This is a sustaining innovation and the suppliers may then compete with the luxury cars from BMW. The real disruption is happening in China. There, every tenth car is already an electric car and that costs only 3000 dollars. These are only small cars, but many can afford them. This leads to growth.

Another example from Christensen is the Godrej company in India, which manufactures refrigerators, among other things. The company has recognized that many Indians cannot afford a cheap refrigerator either and is developing a new technology to keep food cool. The device is offered for $49. The demand is huge, and many new jobs have been created.

Christensen recommends that established companies react to disruption when it occurs. But they should not overreact by giving up their profitable business. Instead, they should strengthen their relationships with their key customers and invest in sustaining innovation. They can also create new business units that focus solely on the growth opportunities of disruption. However, his research shows that the success of these units is heavily dependent on them running separately from their core business. Because they need a completely different organisational and cost structure. This means that companies have to manage two different organisations for a period of time (ambidextry).

As the disruptive business grows, it may also poach customers away from its core business. But managers should not try to solve this problem before it is a problem. 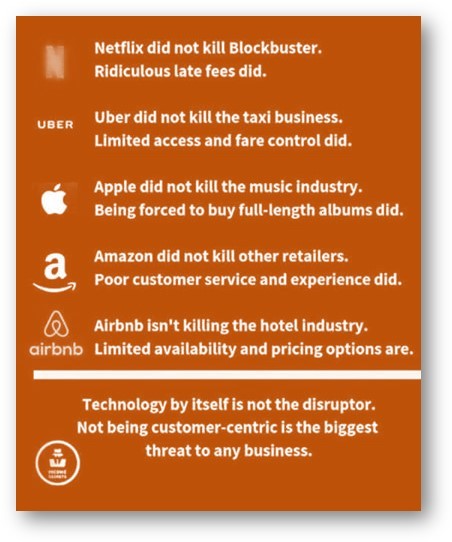 Clayton Christensen (1952 – 2020) was Professor of Business Administration at Harvard Business School and is considered a leading global expert on innovation and growth. He is the author of many books and several hundred articles. In his first book “The Innovator’s Dilemma” (1997) he dealt with the theory of disruptive innovation for the first time. He is the founder of several companies, including the consulting firm Innosight and the investment firm Rose Park Advisors, as well as The Christensen Institute, a non-profit think tank focused on disruptive innovation in healthcare and education.

The full article on this topic can be found in the Harvard Business Review, December 2015 issue: Clayton M. Christensen: What Is Disruptive Innovation?

Digitisation And Digitalisation – You Need To Know The Difference
Scroll to top
Pick up new momentum!

Get to know me personally